Sometimes it seems like musicians, or experts in any field, are riding on the spur of the moment. In reality it is us, the audience, who canter into the orchestra hall with high expectations 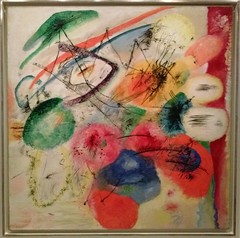 and are riding toward an emotional crescendo when the concert begins. Many of us are not even musicians by training. We do not spend the countless hours relentlessly practicing and painstakingly mastering the music, the instrument and the art.

Yet certainly we do appreciate their tenacious efforts, and it shows with the Pittsburgh Symphony Orchestra. For myself, the spur of the moment translates into my fullest undertaking to be at Heinz Hall and to experience the music, to staunchly record for posterity the encounter with words and pictures and perhaps deftly extrapolate the magic of the exhibition.

Before the concert my friend Robert and I were discussing the Pittsburgh Symphony in the lobby. 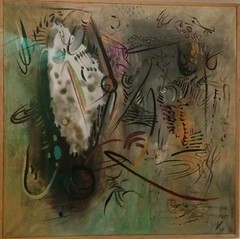 On the wall, a portrait of William Steinberg reminded Robert of attending as a young child and remembering the performances led by this legendary conductor. We went on to discuss composers like Mussorgsky and Ravel, and the knowledge that he gained from his readings on classical composers. Later, after the performance he reflected on the mastery of Ravel, that he does full symphonic works as well as any composer.

Robert now lives in New York. He asked if I’ve heard the New York Philharmonic and I confessed that I had not. I should remedy that. The last time I visited him a few months back we went to museums to see the art. Yes, the Pictures at an Exhibition. One of my favorite artists is Vasily Kandinsky, some his works are currently on display at the Guggenheim Museum in New York. I’ve scattered a few of those works in this post. 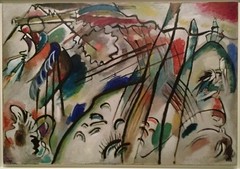 first gesture of his baton, guest conductor Lionel Bringuier began to unravel the enchantment of Ravel. Mother Goose, a “ravishing orchestral transcription” of pieces he had written for his friend’s young children. Here they come alive, programmatically portraying fairy tales in music.

In my mind, I immediately hear the sounds of birds with the woodwinds. It spreads out with the cellos and sweetens with the violins, lazily ambling then all take flight, using the full orchestra to great effect. There comes buzzing, twirling and spinning. Many of the sounds seem ethereal, and the pizzicato over the woodwinds is simplicity yet brilliant. Bows drum the strings and other non standard techniques are scattered throughout. 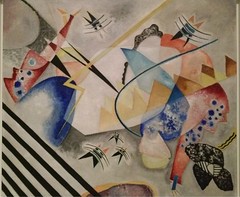 the Conversations of Beauty and the Beast, the contrast between the deep notes of the horns versus high sounds from flutes and other woodwinds is stirringly dramatic. In fact there is drama all around in this piece, woodwinds versus strings, xylophone versus pizzicato, solo versus orchestra, left hand versus baton, pureness versus dissonance and blending versus striking out.

And that’s just what I could think of while on the edge of my seat anxiously awaiting every creatively developed nuance. The Enchanted Garden ending is a recognizable and fitting ending blending ornate natural richness with mellow serenity. 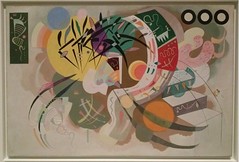 a few chairs on stage are shuffled to make room for Principal Viola Randolph Kelly, the next piece was about to begin. Before this evening, I had never heard the Paganini Sonate per la Grand Viola. Mr. Kelly’s viola instantly came alive in his solo, which began after a few clever introduction bars from the orchestra filled with pizzicato. The sonata reminded me of a symphonic poem form, yet the movements are each distinct and loosely held together.

The sounds from the viola were 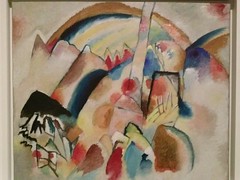 amazing, crisp, clear and filled with reverb and stunning dynamic range. My favorite were the very low notes, a sound that could only come from a viola. Mr. Kelly received a robust standing ovation, and he turned to applaud the orchestra, sharing the spotlight, and he even pointed to his viola as if to say: hey, don’t forget to applaud for the viola as well.

After intermission came the highlight of the evening, Mussorgsky’s Pictures at an Exhibition, orchestrated by Ravel. My friend told me that it had been orchestrated by many others, but this is the most popular version and that which is most often heard. 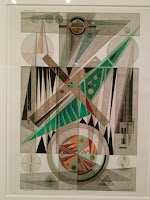 He described to me the brusque nature of Mussorgsky, and contrasted that to the perhaps gentle nature of Ravel. I could almost picture it in my mind, extrapolating from the music itself. Just imagine who would win; Mussorgsky’s Night on Bald Mountain or Ravel’s Daphnis et Chloé. But tonight we’ve got both and they both win!

The encore for the evening, presented by Lionel Bringuier is the Farandole from Bizet’s L’Arlésienne Suite. I never tire of the full Pittsburgh Symphony, all 101 orchestra members in unison belting out a large amalgamation of sound to bring a smile to my face!