This evening at Heinz Hall the audience was delightfully treated to three chiefly different compositions by Richard Strauss conducted by Manfred Honeck and passionately played by members of the Pittsburgh Symphony Orchestra. Not only that, but the inexorably persuasive and stunningly radiant rendition given by Joshua Bell of the Brahms Violin Concerto left no patron without a smile. This was a really enjoyable concert!

One of my favorite authors passed away this week. In his book “Fahrenheit 451,” Ray Bradbury wrote: “Everyone must leave something behind when he dies. Something your hand touched some way so your soul has somewhere to go when you die, and when people look at that tree or that flower you planted, you’re there. It doesn’t matter what you do so long as you change something from the way it was before you touched it into something that’s like you after you take your hands away.” These words are touching. I thought of this theme while listening to the selections this evening. The book is set in a futuristic society where people don’t read books, but watch TV. But the main character is an individualist who escapes this controlled society into the country, where books are memorized to be preserved for the future revival of civilization.

While listening I think of the gift of freedom and the rights against censorship that we all enjoy. I’m grateful to past generations for these gifts, and maintain that we should all fight to preserve them. I also think not only of books and words, but of notes. Richard Strauss composed all three of these works in the late nineteenth century, yet he lived many more years and died in 1949 in Garmisch-Partenkirchen, Germany. He lived through two world wars, and saw the advent and fall of national socialism. In his eyes, ears and thoughts there must have been the tensions and drama that government can bring upon the individual. His early music of the roaring 90s sounds youthful, even the composition Death and Transfiguration has a very youthful feel to it, as if the whole piece represents the ‘transfiguration’, or ‘Verklärung’ in German. Yet his early music also seems to hold a certain connection to these themes, perhaps I imagine so based on my line of thought.

Certainly Strauss and Brahms have changed something, they’ve forever changed music with their wonderful compositions. Their time period would have had contemporaries in Jules Verne and H. G. Wells. Bradbury himself has left something behind in his writings. Each of these composers and writers I feel I have a connection based on what they’ve left behind. And I wonder, in my life, what will I leave behind.

Before the concert I visited the Pittsburgh Arts Festival. I rode my bicycle from the garage where I parked, down to Point State Park, and walked around to see and experience the art and festivities. This musician was playing a ‘Didgeridoo’. The photo was taken with the camera on the ground for effect. The sounds from this are amazing, especially with the audio reflections under the bridge at the point. Here is a sampling of the sound that I recorded when he played: Box audio of Didgeridoo at Point State Park by Douglas Bauman 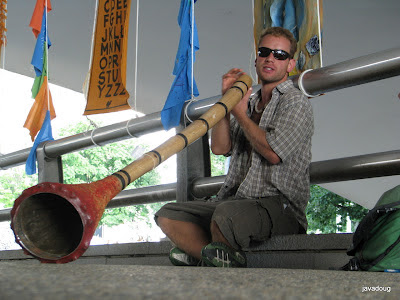